The World Association of Marching Show Bands invites your band!

Fine Marching Bands invited to represent the US at prestigious competitions and festivals presented by the World Association.

These feature great venues perfect for marching bands, large and enthusiastic audiences, bands from all around the world to teach and learn from, a variety of performance opportunities as well as the Championship itself.

International opportunities of this caliber are rare!

The annual 2012 Rastede Concert and Marching Band Festival in Germany is held at the end of June into early July every year. This is a World Association sanctioned event (not a World Championship). Enjoy the camaraderie and fellowship of this friendly community event prior to visiting other cities or countries in Europe.

KIconcerts is proud of its long involvement with the World Association and looks forward to presenting the finest US marching bands in these international events.

We are thrilled to announce a new role at KIconcerts, Director, International Programs. Kelly Sparks has been appointed with a view to further strengthening our relationships with our Directors and Conductors. Kelly, who has 20 years experience in sales and marketing, will be working closely with Oliver to liaise with you as you plan your performance tours of the future.

A World of Custom Tours 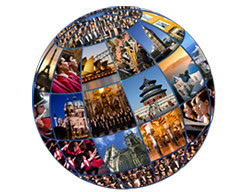 KIconcerts is proud of its custom tour offerings. Custom tours allow for travel to so many of the great destinations around the world and can be tailored precisely to the needs of every individual ensemble.

India
A pioneering destination. A land of sensory excitement, fine venues, great audiences and a desire to connect to other styles of music. Dynamic, young, cultures, contradictions – a tremendous past and future worthy of your attention and beckoning your performance.

TIME OF YEAR
Choose when to travel; cheapest into Europe over winter, explore the Southern or Northern Hemispheres in Spring before the peak season, travel in summer when the days are long and everyone has holidays. Or just pick a holiday week, Thanksgiving, Easter, President’s or Martin Luther King Day or a week with two weekends when no-one else is travelling.

PACING
Perform as much as you choose. Tour as much as you please. Leave as much time as you wish for your people to explore these new lands, sounds and tastes.

NATURE OF PERFORMANCE OPPORTUNITIES
Go big – the premium city halls, go intimate and perform to full houses in smaller towns, make your mark and perform at St Peter’s Basilica or bring an audience of 2000 to their feet at the Sydney Opera House. It’s your tour…its your choice.

Talk to us about your touring aspirations. Let us prepare proposals and tailor the tour to your specific needs. Custom tours – customer’s tours!

The International Band Festival in Spain 2013 with Dr. Matthew George

He has invited bands from across North America to join him in Valencia, Spain in June 2013.

For more than two centuries, Spain has harbored a hidden treasure: Bands.
The European epicenter for band activity is in Spain. From amateur groups to highly respected professional ensembles, Spanish bands are a way of life. Great repertoire written by leading Spanish composers is abundant. Every city has a professional band and there are thousands of superb amateur bands throughout the country.
Two of the most beautiful cities in Spain have exceptional band traditions, Barcelona and Valencia. I invite you to join me as we will have the opportunity to perform in exchange concerts, rehearse and perform alongside local bands, and to perform in one of the most beautiful concert halls in all of Spain, the Palau of Valencia.
Join me in clinics with leading conductors of Spain such as Raphael Sanz-Espert, and composers like Luis Serrano Alarcón. Because the tradition of band music is so rich, there is also a tradition of large, enthusiastic audiences. Your band will surely feel welcomed and appreciated.Beyond the music, Spain has so much to offer in the arts, culture, food and ambience. This will be an unforgettable experience for you and your musicians.
I hope to see you in Spain in 2013,

KI has been honored to work with Dr. George in many capacities for many years now. He has led festivals for KI for instance in China and in Australia. He has commissioned: Gillingham, Cichy and Ticheli on our behalf so far and he has advised KI on staging the finest band tours for the many we have had the privilege to serve.

Spain is a country waiting for you to fall in love with it. It’s history, culture, picturesque scenery, way of life and especially its music are compelling. From the Gothic Quarter in Catalonian Barcelona boasting Gaudi architecture and the breathtaking Sagrada Familia, to the pride of the nation’s capital – Madrid with the extraordinary palace and stately churches and onto Valencia, the jewel in the crown and the city chosen by WASBE to host their 2013 gathering.

Join us in Spain
Posted by KIconcerts at 11:58 AM No comments:

KIconcerts is delighted to be working with Rollo Dilworth once again to stage fine choirs internationally, this time in France

Today he invited choirs to consider joining him in France for the 2013 festival which will highlight the works of both North American and French composers, including Eleanor Daley, Rollo Dilworth, Maurice Durufle, Morten Lauridsen, Donald Patriquin and Francis Poulenc.

While in France, Rollo is creating opportunities to meet and collaborate with local choral ensembles. The festival includes performance options in Lynon and in the Normandy region paying tribute to fallen soldiers. Individual concerts are also arranged for those choirs who wish them.

The KI team has proudly presented Rollo Dilworth in China, Italy and Australia and this year he will be leading a festival in Canterbury and Southwark Cathedrals a month prior to the London Olympic Games.

The directors and choristers that have worked under his direction in the past have been thrilled to work with the composer (both in the combined rehearsal setting and in individual choir settings as well), been excited by his musicianship and of his innate abilities as a world class music educator.

France is a superb performance destination both for custom tours and in a festival setting such as this. We rehearse in the charming city of Lyon where we perform with a local youth choir, there are options for individual concerts and of course time for sightseeing. In Paris we perform as the Gala Festival Choir, perform individually if desired, tour the Louvre, stroll the Champ de Elysees, ascend the Eifel Tower, tour Montmartre experiencing all aspects of this romantic city of fashion and high culture. Extension tours are offered to visit Normandy and honor our fallen heroes with an option to perform in the North of France as well.

Join us in France
Posted by KIconcerts at 11:08 AM No comments:

KIconcerts was honored to present Simon Carrington and the Festival Gala Choir in London's Southwark Cathedral earlier earlier this month in a performance of the Coronation Anthems to welcome the year in which the Queen celebrates the 60th anniversary of her coronation and the Summer Games are staged (July/August).

In the presence of the representative of the Ambassador for the United States of America, an (over) capacity audience enjoyed the individual and combined performances by the Southern Connecticut State University Choir and Christopher Newport University Women's Chorus choirs together with singers from Texas A&M International University, Laredo Philharmonic Chorale and Westchester Chorale.

It was a night of triumphs including raising £2,000 for a local hospice!

Join us in  for custom or festival tours in 2013 and 2014 including a festival led by Jonathan Willcocks. Places are still open for individual basses, tenors and altos to sing in the ACDA National Youth Honor Choir to be presented in  in the summer of 2012 under the direction of Simon Carrington.
Photos by: Isabel Chenowet, Public Affairs, Southern Connecticut State University